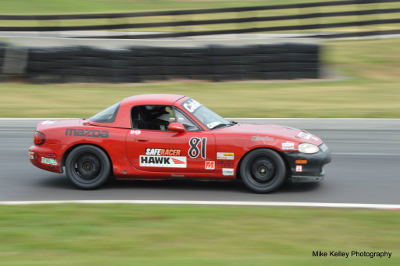 Ted Cahall created the marrspoints.com web application to solve the issue of "delayed" points standings for the MARRS auto racing series. It was also an interesting way to join two of his passions - software development and auto racing. Please do not take the word "delayed" to mean Ted is unusually impatient. The marrspoints.com results are often updated within minutes of a race completion. Whereas results used to take in the order of a week to two weeks when manually tabulated by hand. Ted hugely appreciates all the work that Lin Toland and ALL of the WDCR volunteers put in each race weekend to make club racing a reality. Remember - they are volunteers! :-)

The marrspoints.com application tracks the race results and points totals for the SCCA Club Racers in the Mid-Atlantic Road Racing Series (MARRS) of the Washington DC Region (WDCR) in the Northeast Division of the SCCA. It tracks both Gross and Net Points totals and determines the class champions at the end of each racing season.

How does marrspoints.com gets all of that data?

The data is accessed via Race Monitor, the same application most racers use at the track to follow the results. Note, this is not the official finishing position data, but allows provisional results (and points) to be posted almost immediately. Special thanks go to Mark Lubischer of Race Monitor for building those APIs and providing access to them for sites like marrspoints.com. Once the official results, with penalties, DQs, etc. are published, these provisional results are updated and marked official on the home page and each race result page. A big thank you goes out to the WDCR Timing and Scoring team for providing the "Official" race results of the Summit Point races in CSV format. These official results and ingested into the system at the end of the race weekend.

For home races, the Washington DC Region granted marrspoints.com access to the SCCA IDs of the racers from MotorsportReg.com. This allows the mapping of the MARRS racers to the Race Monitor results and MARRS competition classes. Another thank you goes out to Brian Ghidinelli, creator of MotorsportReg.com for building and publishing APIs to that application as well.

More recently marrspoints.com collects some of the driver's SCCA IDs through screen scraping the RaceHero.io web application made by the same great folks that make MotorsportReg.com.

Who should I thank / curse for making this happen?

Lin Toland is an SSM racer and was the the official points keeper while marrspoints.com was being developed. He was also the chief consultant and adviser to the creation of this application, and without his sponsorship, it would not exist today. Special thanks also go out to Paul Anderson for his help in encouraging the WDCR to accept MARRS Points as the tracking system of record for the 2016 season. It was an honor to receive the Regional Executive Award for the creation of marrspoints.com in January of 2017.

This site was developed by Ted Cahall in Java, JSP, JavaScript, jQuery, CSS, and Bootstrap 3 (with the admin tool upgraded to Bootstrap 4 in 2019). It runs in the Amazon AWS Cloud on EC2 nodes with an RDS (MySQL) back-end. You can read more about the creation of marrspoints.com on Ted's technology blog.

Ted Cahall is an SM driver in the Washington DC Region of the Northeast Division of SCCA Club Racing. Ted has worked as an executive at Microsoft, Bank of America, AOL, CNET, Digital River and started his career at AT&T Bell Laboratories. He is currently an independent software consultant specializing in the Digital Ecosystem. Ted occasionally maintains a blog at CahallRacing.com. Some of Ted's previous racing adventures are archived at cahall.com.


The 2015 racing season was the 40th anniversary of the MARRS series.